Caroline Lucas MP, Co-Leader of the Green Party, was greeted enthusiastically by a large group of members and supporters at Marlborough Rd Methodist Church on Saturday. She was visiting the city to visit the Jubilee Community Centre, and to support Keith Cotton, the Green candidate in St Peters in the upcoming district council elections. 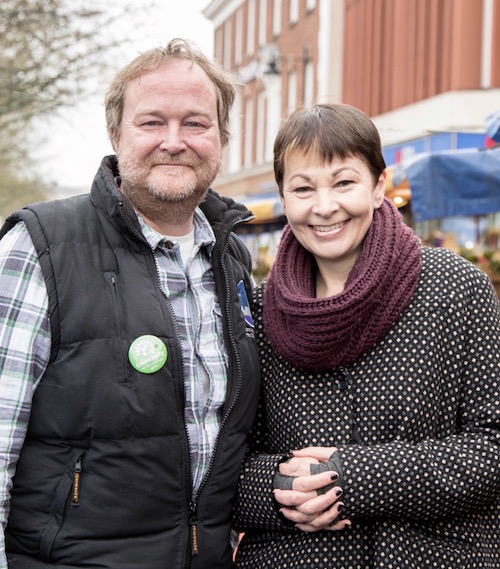 She said, "So much has been achieved in St Albans because of one Green Councillor, Simon Grover: from solar panels and electric taxis, campaigning on air pollution, through to helping refugees.  Green Councillors work hard. Think what can be done with Keith Cotton on the Council as well to work with Simon for local residents and hold other parties' feet to the fire."

She went on to inspire the audience in speaking about the enormous difference that Green policies could make across the board, including on environmental protection, social care and housing.

Some members of the audience were concerned about the risks of plastic and asked about single use plastic cups. Caroline Lucas said the government had gone back on introducing legislation and was quite wrongly relying on voluntary action instead because it hates regulation.

Speaking about the dangers posed by Brexit, Caroline Lucas said:  "The government is trying to pull the wool over our eyes saying that environmental protection will be the same after Brexit. But it simply isn't true. We won't have the EU to back it up by enforcing legislation and levying fines. There are so many areas at risk. We must have a people's verdict on any deal before any final agreement with the EU."

Turning back to the local elections, she urged support for Keith Cotton: "This is a vital opportunity to get a second Green Councillor on St Albans Council who will work hard for green policies and really listen to what matters to local people.”