St Albans residents flocked to see Green Party Co-leader, Jonathan Bartley, for a talk and questions at a packed event on Tuesday evening. 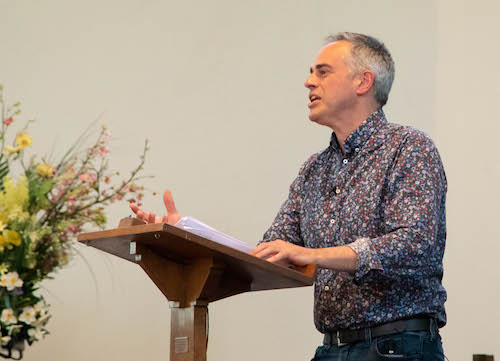 Bartley spoke calmly but powerfully about the urgency of change that we need to see in this country – at an individual level, but even more importantly, at a political level.

He also spoke more widely to the crowd of approximately 120 people with his vision for a fairer and more equitable society - one for ‘the common good’. He spoke about the many companies trying out a 4 day working week (paid for 5) – not to the detriment of business but allowing people to be happier and more productive.

Steering clear of political rhetoric, Bartley spoke honestly about practical measures such as higher levies on frequent flyers. ‘This is not about penalising people taking a yearly family holiday”, he said. “Many models show it could even be cheaper for the first flight you take, then progressively expensive. This is about the 15% of people who take 70% of the flights.”

There was an energy from the audience to take action and get involved. Attendees signed the Sustainable St Albans petition to the Council to ‘Declare a Climate Change Emergency’ locally. The petition has already passed the 500 mark to trigger a council debate, but Catherine Ross of Sustainable St Albans stressed that more signatories would strengthen the message to local council leaders that this is a vital step towards more radical action.

The Green Party saw a 50% increase in their local election vote in St Albans. Local Councillor, Simon Grover, who hosted the talk, said, “It was fantastic to be able to welcome Jonathan to St Albans after the huge boost of interest in what we are doing and in our vote – both here and across the country in the local elections. He spoke very eloquently and really inspired the audience with his vision of a better, more sustainable society.”